Pattex is celebrating its 60th anniversary. Since its launch in 1956, the Henkel brand known as the household adhesive for any situation has not only become synonymous with total reliability in gluing and bonding but has, in the intervening decades, constantly underlined its pioneering position as a source of innovation in the do-it-yourself ‏(DIY) sector.

Henkel Adhesive Technologies is the leading solution provider for adhesives, sealants and functional coatings worldwide. Around the world, industrial customers, professional craftsmen and private consumers put their trust in brands and technologies from the Henkel business unit. This confidence is also reflected in the now 60-year success story of Pattex and its numerous international sister brands.

Back in 1925, Henkel launched its first adhesive onto the market, a wood glue for packaging. Three decades later, the company began delighting craftsmen, cobblers in particular, with a modern contact adhesive. This first cold-curing power adhesive was available in jars, cans and buckets and carried the name Pattex. In the following year, 1956, Pattex also became available to private consumers. And from 1964 on, Henkel began marketing Pattex power adhesive in small 125-gram tubes similar to ones we see today.

Over the last few decades, this successful brand has passed numerous milestones, developing product innovations for DIY enthusiasts, crafts people and householders alike. Through its innovative strength, Henkel has succeeded in developing a product portfolio ideally adapted to consumer requirements. Especially for craftsmen, there is also the Pattex Pro range, which includes not just assembly adhesives but also a variety of tools.

Under the name “Pattex Compact,” for example, the first non-drip adhesive was launched onto the market in 1972, enabling repairs to be carried out at home without the usual sticky mess. The year 1977 saw the launch of “Pattex Wood Express,” and two years later it was joined by the first waterproof wood glue from Pattex. At the beginning of the 1980s, Pattex saw its portfolio expanded through the addition of hotmelt guns and the first superglue to be developed by Henkel. Nowadays, Pattex is able to offer a wide range of these instant-setting specialty adhesives for a broad spectrum of different applications.

In 1989, Henkel developed a quick-bonding specialty adhesive. As a product that sets immediately, it enables items to be fixed to walls without the need to hold them in place for hours on end. Thus the assembly adhesive was born. And in 2006, Pattex brought another important innovation to market. With its new generation of assembly adhesives, bonded objects could now also be removed again from the wall after having once been adhered. This heralded the development of a series of new, removable assembly adhesives marketed as “No more Nails” products in the form of both a double-sided adhesive tape and a dispensing cartridge.

Among the latest innovations, there is a completely solvent-free universal adhesive “Pattex 100%.” The product hit stores in 2012 and offers particularly powerful adhesion for applications both inside and out. Launched onto the market just this year were the following: The universal adhesive “Pattex 60sec,” which cures in just a minute, and the ultra-easy-to-use silicone bathroom sealant “Pattex RE-NEW” which can be applied straight onto unsightly old sealant without any special craft skills or tools.

Pattex’s history also constitutes a marketing success story, one in which communications have been consistently aligned to customer requirements over the last 60 years. For example, Pattex recognized the DIY boom early on, launching associated products onto the market to catch the wave. Pattex has also responded to the growing number of hobby modelers and craft enthusiasts as well as to the ever more varied range of materials that household items in need of repair are made up of. In addition to quality and reliability, the essence of the brand is one of consumer empowerment. Thus Henkel offers not only product websites but also the DIY portal YouJustDo (www.youjustdo.com) which presents ideas, information and instructions for various projects at home.

Pattex products are available in 69 countries – under numerous sister brands depending on the region and that differ only in terms of their name and design but not their technology or logo. In Russia and parts of Eastern Europe, for example, consumers trust ‘Momeht,’ in Mexico the products are called ‘Resistol’ and in France the consumer knows them as ‘Rubson.’ In Germany, the adhesive strength of Pattex has become genericized over the last few decades. If someone or something “sticks like glue,” Germans tend to say that it “sticks like Pattex.” 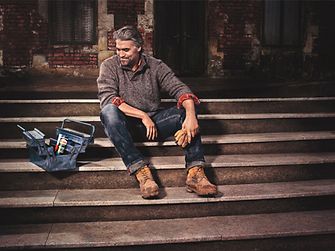 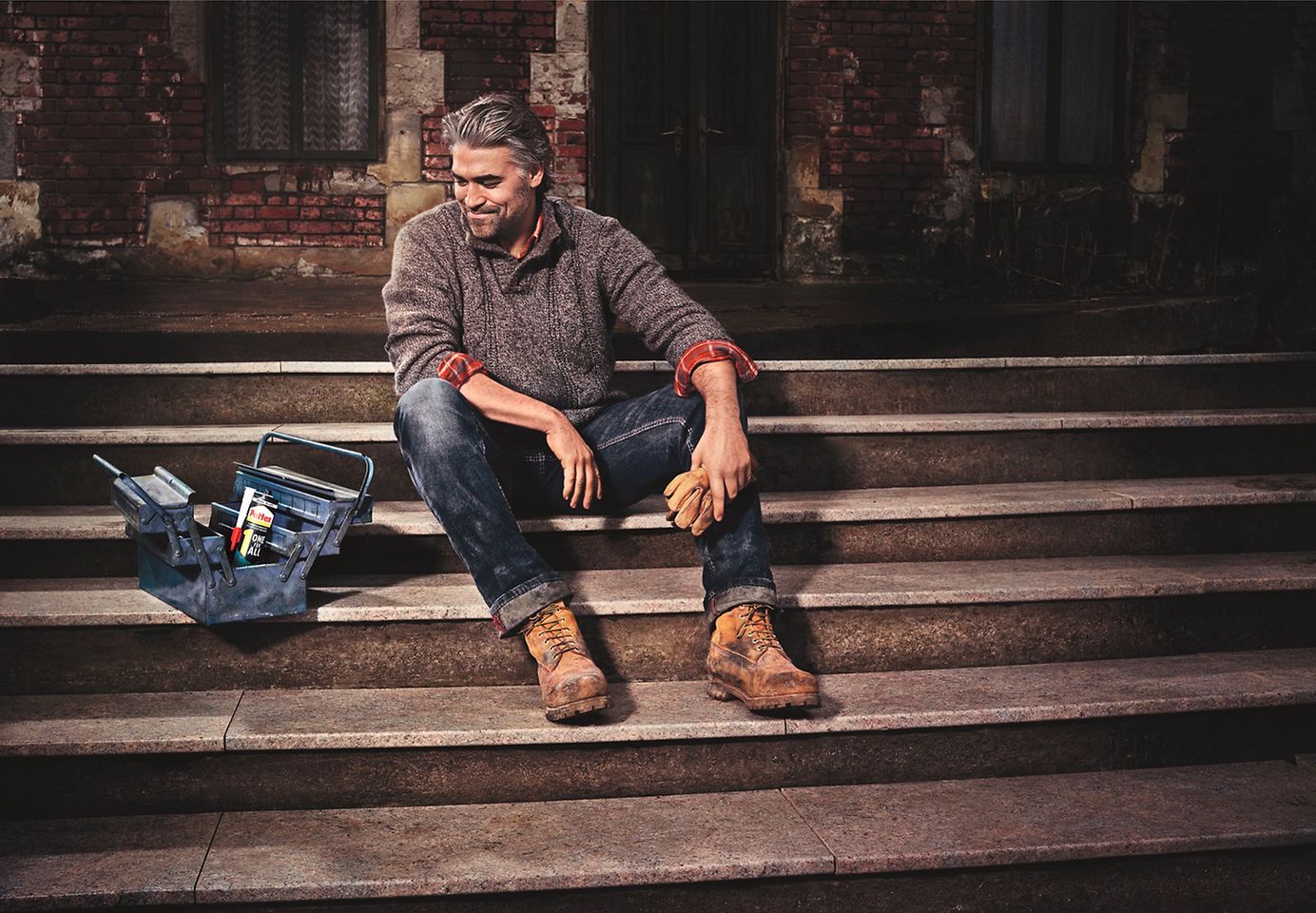 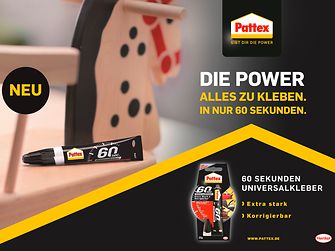 Innovation: Pattex 60sec is the first all-purpose glue that cures in just one minute

Innovation: Pattex 60sec is the first all-purpose glue that cures in just one minute 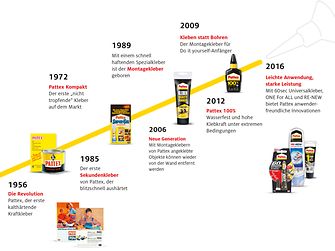 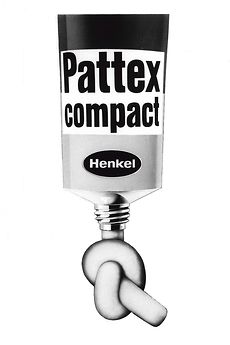 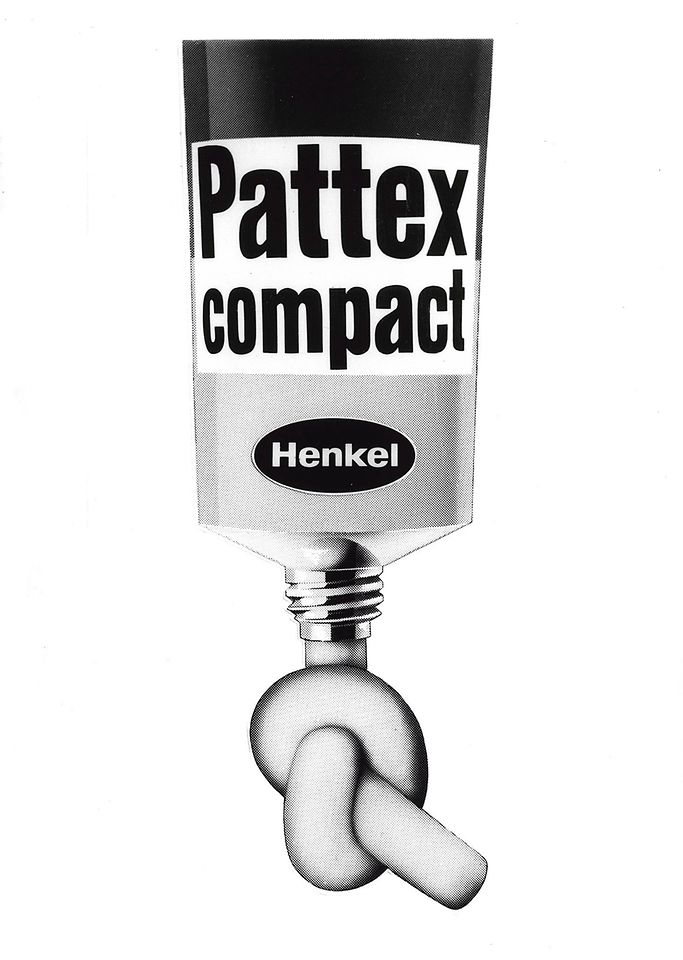 Innovation in the year of 1972: The first non-drop adhesive for home repairs

Innovation in the year of 1972: The first non-drop adhesive for home repairs