The United Nations General Assembly proclaimed 2015 as the International Year of Light and Light-based Technologies. Over the past years, global megatrends such as urbanization, energy and digitization have driven new lighting inventions. An increasing number of applications are using light emitting diodes ‏(LEDs) that offer improved brightness with warm light, lower energy consumption and longer life spans. With its comprehensive range of solutions, Henkel Adhesive Technologies is a key enabler for new developments in LED.

LEDs have become the leading technology for lighting solutions globally. McKinsey states that over 70% of lighting worldwide will be LED-based by 2020. Henkel Adhesive Technologies, the leading solution provider for adhesives, sealants and functional coatings, is a key supplier and development partner for luminaire companies around the globe. “The headlights of cars, illuminated advertising of stores and restaurants, desktop computer screens or smartphone displays – these are examples of everyday objects using LED technology,” states Mike Olosky, Corporate Senior Vice President and Global Head of Innovation and New Business Development at Henkel Adhesive Technologies. “What they have in common: They are all built with the application of high-performing adhesives.”

However, rising consumer expectations and increasing regulatory requirements create challenges: The overarching goal is to provide long life for LED lighting devices, even in applications exposed to harsh conditions, such as extreme temperatures, dust, dirt, vibration and underwater immersion. Henkel Adhesive Technologies is continuously working on innovation in the areas of bonding and sealing, potting, thermal management, surface treatment and low-pressure molding – enabling lighting manufacturers to succeed in their markets. Examples of such innovations:

Partnerships for the benefit of industrial customers

US-based Cree is a market-leading innovator of lighting products and LED components. Henkel collaborated with the company to identify, test, and validate a wide range of Loctite and Teroson adhesives to determine their performance in direct and indirect LED assembly applications. “Adhesives and sealants are important to the production of an LED lighting fixture,” explains David Cox, Director of Alliance Development at Cree. “Incompatible materials such as adhesives can cause the encapsulant to turn brown and block light emitted from the LED. We are excited by Henkel’s development of Loctite products that meet our requirements and help to maintain the color point of our LEDs. Such adhesives help customers to ensure the consistent quality and long-term reliability of our LED lighting components.”

In collaboration with lighting manufacturers, industry experts and researchers, Henkel experts have analyzed what lighting technology might look like in 2025. The result of this work is the trend report “Lighting in 2025” which shows the future growth potentials in lighting, with a focus on automotive and housing applications. Based on the report results, Henkel Adhesive Technologies has identified organic light-emitting diodes, or OLEDs, as a specific area of focus extending beyond traditional LEDs. OLEDs are flexible, provide uniform surface illumination, save energy and have already proved their marketability in the first applications

In 2014, Henkel signed a joint development agreement with a US start-up that has developed a patented cost-efficient process for high-volume flexible barrier film production. These films protect electronic components against humidity and oxygen. Central to the integration of the ultra-barrier film is its ability to deliver robust adhesion to and compatibility with a variety of substrates. “Flexible barrier films will play a key role in the launch of the first fully flexible displays of electronic devices,” explains Paolo Bavaj, Corporate Director New Business Development at Henkel Adhesive Technologies. “This technology also offers tremendous potential for OLEDs in terms of providing flexible and customizable lighting solutions for various innovative applications. Our technological know-how and early stage collaborations with manufacturers will enable us to also benefit from the projected market growth of OLEDs.” Over the past years, global megatrends such as urbanization, energy and digitization have driven new lighting inventions.

Over the past years, global megatrends such as urbanization, energy and digitization have driven new lighting inventions. 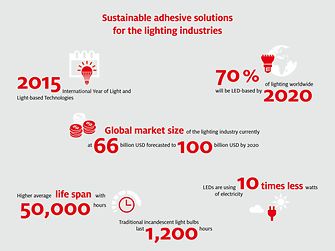 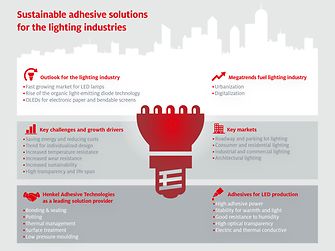 With its comprehensive range of solutions, Henkel Adhesive Technologies is a key enabler for new developments in LED.

With its comprehensive range of solutions, Henkel Adhesive Technologies is a key enabler for new developments in LED. 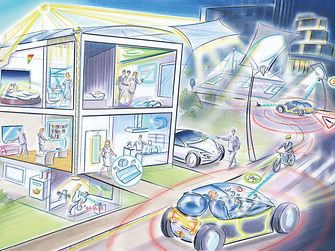 In collaboration with lighting manufacturers, industry experts and researchers, Henkel experts have analyzed what lighting technology might look like in 2025.

In collaboration with lighting manufacturers, industry experts and researchers, Henkel experts have analyzed what lighting technology might look like in 2025.