At this year’s Ligna in Hannover from May 11 to 15, Henkel will be presenting its complete range of products for structural engineered wood components, known by the name of Purbond until now, under the Loctite brand for the first time. The focus of the product presentations will be on the new primers that have been specially developed for species-specific bonding of deciduous woods – a groundbreaking topic in timber construction. As adhesion promoters between the substrate surface and the adhesive, they assure the necessary strength of the adhesive joints in load-bearing construction elements made from deciduous woods.

The product presentations of the Loctite Purbond adhesive systems will focus on the newly developed primers for species-specific bonding of deciduous woods such as beech, oak, ash, robinia, birch and Spanish chestnut, or the “alternative woods” as they are known. In addition, a primer has been developed, and is officially approved, which enables secure bonding of larch wood using Loctite HB S Purbond products. Glued elements made from deciduous woods point the way forward in engineered timber construction: Following the increase in forest restructuring, the proportion of deciduous trees in forests will rise, while that of conifers will decrease.

Compared to coniferous woods, deciduous woods have much greater strength and rigidity, which opens up completely new possibilities in timber construction. These woods can be used to make elements with very high load-bearing capacity, allowing smaller cross-sections than are possible with spruce, for example, and making it possible to span larger distances.

The most important aspect when bonding engineered wood elements is the strength of the bondline. For this application, Loctite offers its Loctite HB S Purbond line ‏(Z-9.1-711 and Z-9.1-765), patented and approved throughout Europe, in combination with two wood species-specific primers as adhesion promoters between the engineered wood substrate and the adhesive: Loctite PR 3105 Purbond for alternative woods and Loctite PR 7010 Purbond for larch wood.

After planing of the layers, the aqueous solvent- and formaldehyde-free primer solution is applied to the substrate surface in order to achieve homogeneous bonding quality in line with requirements. After leaving the primer to act for the defined time, the Loctite HB S Purbond adhesive can be applied. Even robinia wood, which was considered to be “unbondable” up to now, can be glued with this new system.

Another benefit the new adhesive system brings is the way it accelerates processing cycles. With other adhesive types, the bonding process, including clamping in the press and the post-press curing time, could take up to three days. Use of adhesives from the Loctite HB S Purbond line in combination with the primers reduces the process cycle time to seven hours overall, with a dwell time of only three hours in the press. This makes it possible to manufacture and ship out construction elements within one work shift – a huge gain in time for producers of load-bearing construction elements made of engineered wood.

The viscosity and flow behavior of the adhesives in the Loctite HB S Purbond line assure optimal, one hundred percent wetting of the substrate surfaces. The adhesive system can be used for finger jointing and flat lamination to manufacture timber construction elements made of solid timber, glue-laminated and cross-laminated timber panels, duo and trio beams, and blockhouse planks – in short, the whole spectrum of structural timber construction elements.

The products in the Loctite HB S Purbond line contain no solvents or formaldehyde and therefore fulfill even the most stringent requirements as imposed by Japan, such as formaldehyde-free F****. This gives producers the assurance that they are offering their customers timber elements that comply with the most advanced requirements concerning indoor air quality.

Long-proven adhesive solutions will also be on show

In addition to the new primers and the Loctite HB S Purbond line, the globally operating Henkel company will also be presenting long-established and trusted bonding solutions for its most important markets. These are the classic glue-laminated timber construction regions of Europe, North America and Japan. Presentations will include the well-proven HB E line for the USA and Canada – the first-ever one-component PUR adhesives to be approved in the USA and Canada for structural engineered wood products.

Glued samples, videos with application examples, and product information materials at the trade fair stand document the performance capabilities of the Loctite products and show that the global trend in structural engineered woods is moving in the direction of 1K PUR adhesives.

Experts from Henkel’s own Center of Competence will be present at the stand in Hall 12 ‏(Stand E 30). They steer and coordinate the product development, application technology and marketing activities of the adhesives specialist and will be happy to answer questions and exchange views with all interested parties.

In April 2011, the Swiss PUR adhesives specialist Purbond, based in Sempach Station, became a one hundred percent subsidiary of Henkel. In the course of rebranding at Henkel according to technology clusters, all adhesive solutions involving polyurethanes and other reactive systems for engineered wood have been reassigned to the Loctite brand since the end of 2014. The Purbond name and the suffixes used up to now have been retained as part of the new product naming system.

The product compositions and the chemical formulas remain unchanged. The same applies to all approvals and certifications, which remain valid, and updates to the Technical Datasheets and Material Safety Datasheets, which merely reflect the name change. 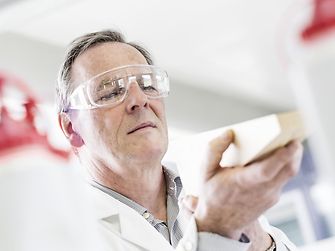 Employee at the Center of Competence in Sempach Station

Employee at the Center of Competence in Sempach Station 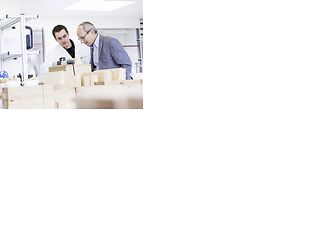