21 student teams from 30 countries around the world took part in the international final of the “Henkel Innovation Challenge” in Düsseldorf. The students had three days in which to showcase their innovative concepts to a panel of Henkel managers. The jury ultimately selected the team from Croatia as having submitted the best product vision for the year 2050. Daren Perincic and Dominik Benger, who are studying at the „Rochester Institute of Technology Croatia“, are this year’s winners of the Henkel Innovation Challenge. In the final, their idea for a revolutionary hairstyling product saw off the concepts entered by their international rivals.

The winners receive an around-the-world-ticket with a value of 10,000 euros and along with the teams placed second and third, they will have the opportunity to meet the Henkel boss Kasper Rorsted in person. “We both have a background in sports and thus have a real passion for challenges. But I didn't expect to win this great challenge at all. The best part of those three days was the international atmosphere. I met so many great people and I will never forget them”, said Dominik Benger.

The winning team’s product idea “H Design” by Schwarzkopf allows its users to change and design their own hair style through an app. This visionary idea convinced the Henkel jury. Second and third place were awarded to the teams from Qatar and India respectively. Second prize went to Jasim Polin and Sarah Mustafa from the Carnegie Mellon University Qatar. Their vision: AOK Allure is the world's first programmable beauty product. Users can treat their skin by using smart substances and a special software. The Indian team of Geetika Goel and Mayank Nandwani, from the Faculty of Management Studies Delhi, took third place. They developed a sustainable surface coating called eCoat, which will be used in the automotive industry.

Once again this year, the competition attracted students from various disciplines from all over the world: ideas were submitted by teams of two from no less than 30 countries, including Brazil, China, the USA, France and India. The students’ task was to create an innovative and sustainable product or technology for a Henkel brand, based on the trends and market needs in 2050.

The Henkel Innovation Challenge takes place for the 7th time. In the last seven years 30.000 students around the world already participated in the competition. For Henkel, this event offers the opportunity to get to know outstanding international students in person and to profile Henkel as a potential employer. Henkel has a workforce of around 47,000 people from more than 120 nations in over 75 countries worldwide. Every year more than 1,500 students across the world carry out an internship at Henkel and in so doing gain initial experience of working at the company.

At the international finals of the seventh “Henkel Innovation Challenge” 21 teams from all over the world presented their product ideas for the year 2050.

At the international finals of the seventh “Henkel Innovation Challenge” 21 teams from all over the world presented their product ideas for the year 2050. 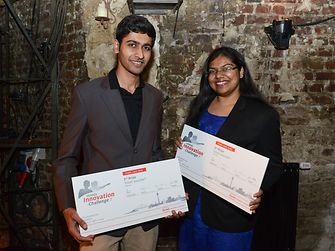 Mayank Nandwani and Geetika Goel from India convinced the jury with their concept “eCoat” and won the third prize.

Mayank Nandwani and Geetika Goel from India convinced the jury with their concept “eCoat” and won the third prize. Dominik Benger and Daren Perincic from Croatia, here with their mentor Helena Grahovac, are the winners of this year’s “Henkel Innovation Challenge”.

Dominik Benger and Daren Perincic from Croatia, here with their mentor Helena Grahovac, are the winners of this year’s “Henkel Innovation Challenge”.