Henkel to showcase molding compounds and silicones at productronica 2013

High-performance hotmelts and silicones will be at the center of Henkel’s exhibits at the 2013 productronica trade show, which takes place in Munich, Germany, from November 12 to 15 this year. The company will be showcasing its new range of products for electrical applications under the Technomelt and Loctite brands. Offering the benefits of high transparency, some are particularly suitable for lighting applications.

Henkel is the inventor of “Macromelt Molding,” a technology that was first used and a quarter of a century ago to encapsulate a cable harness in the engine compartment of an automobile of French car manufacturer Citroën. Since that time, the company’s molding products have undergone continuous improvement, constantly adapting to the needs of their customer industries. There, great importance is attached not just to the performance but also and increasingly to the sustainability of Henkel’s products, which consist of up to 80 percent renewable raw materials.

Nowadays, the brand in question is Technomelt, and this will also loom large at the trade fair, with several innovations on show.

Technomelt AS 4226 is crystal clear and durable enough to stay that way. It is resistant to UV radiation, moisture and extreme weathering. With its transparency and robustness, this innovation from Henkel is ideal for the encapsulation of luminants such as modern LEDs destined for service in the wide outdoors. Street lamps and tunnel luminaires are among the possible applications. Because of the good adhesion afforded to various substrates, high encapsulation ratings of up to IP 67 can be achieved.

And new Technomelt PA 668, which is white in color, exhibits similar properties. It is the only product of its type in the market to offer extreme UV resistance, ensuring that it consistently retains its pure white appearance. PA 668 can also be used in lighting applications in which powerful light reflection is an essential feature.

Technomelt AS 5361 is flame resistant and also self-extinguishing. This Henkel innovation has therefore been assigned to the UL flammability category V2, allowing it to be used for a wide range of applications, including those involving the development of heat. The polyolefin hotmelt extinguishes itself within a maximum of ten seconds.

The product is suitable, for example, for solar equipment, for the encapsulation of cable harnesses of PE as used in automobiles, and for applications in wind turbines.

Henkel offers not just hotmelt adhesives for the protection of electronic components but also encapsulants capable of meeting particularly high temperature and media resistance requirements. One innovative development in the field of products for optical applications, for example the encapsulation of luminants (LEDs), is the highly transparent two-component silicone Loctite SI 5700, which offers excellent adhesion to a wide range of different substrates such as metals and plastics.

It is also highly and durably transparent, reaching transmission rates of up to 96 percent. The tendency encountered with other technologies to yellow under the effects of temperature and/or UV radiation is conspicuous by its absence from this product. Capsules created with Loctite SI 5700 are bubble-free and enable the manufacture of optically clear, high-quality products. The silicone is particularly suitable for the protection and encapsulation of LEDs, for example in modern street lights, facade luminaires, illuminated advertising media, illuminated signs and other outdoor applications.

Thermal conductivity for up to double the service life

Loctite SI 100 is a new silicone-based paste offering good thermal conductivity. This innovative product from Henkel is likewise suitable for various lighting applications in which a permanent reduction in the operating temperature is required or desirable. Given that a decrease in temperature of just 10 degrees Celsius can double the service life of a lamp, this is a property that can often make quite a difference.

Experts from Henkel will be available at Stand 241 in Hall B3 to provide further information on all these Technomelt and Loctite innovations, as well as the other products from the company’s range of adhesive and surface treatment technologies. 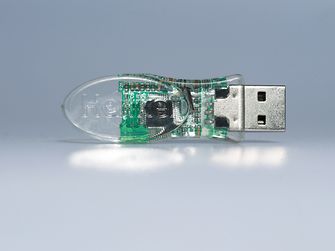 Henkel’s transparent encapsulants can also be used to add to the visual allure of USB sticks.

Henkel’s transparent encapsulants can also be used to add to the visual allure of USB sticks. 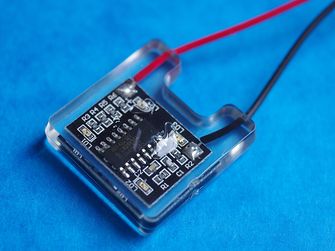