“As long as you change the engine oil regularly, the vehicle will just go on running,” says Jocke Höök with not a little pride in his voice. The talk is about a Swedish manufacturer, widely known as a maker of commercial vehicles of exceptional robustness. However, this bold claim applies particularly to the company’s yellow-colored heavy-duty construction machinery, parts of which are manufactured in a plant in central Sweden, which also happens to be where communications manager Höök has his office.

Earth-moving, material-handling and road-construction machines – they are all manufactured by the company. The factory, where the focus is primarily on axle and transmission production, has a long and proud tradition – to the extent that it even played a key role in Sweden’s industrialization process. Machines have been manufactured here for a long time, starting back in 1832. The first were for arable farming applications. Sweden’s first mechanical loom was also built here, as was the first locomotive, the first threshing machine and the first tractor to have an internal combustion engine.

Traditionally at the cutting edge of technical progress

The manufacturer has constantly remained true to the tradition of driving technical progress – right up to the present day. And that applies not just to the end product but also to the manufacturing process. Henkel, world market leader in the field of adhesives, sealants and surface treatment technologies, has long been a partner, supporting the Scandinavian company in its efforts to produce ever better products ever more efficiently and with ever greater sustainability.

Environmental protection is one of the Swedish manufacturer’s core corporate values, standing shoulder-to-shoulder with those of quality and safety. And Henkel, with its innovative cutting fluid Bonderite L-MR 71-2, helps in the achievement of each of these objectives. The special feature of Bonderite L-MR 71-2 is that, throughout its entire life cycle as a cutting fluid, it requires no bactericide additives.

By developing a new generation of a bactericide-free cutting fluids, Henkel has succeeded in developing a long life emulsion with very low foaming in soft-water and a high water-hardness-stability. A central problem when using water-miscible cutting fluids has thus been resolved. And since their introduction, the new emulsions under the Bonderite L-MR brand have proven their worth in industrial service.

The huge factory hall is clean and tidy. Operating in enclosures, fully automatic milling, cutting and grinding units machine the solid axle blanks, forming threads and bearing journals, and providing these various functional surfaces with their “final polish.” The cooling and lubricating functions are performed by Bonderite L-MR. Neither dirt nor noise escapes beyond these machining cabins. Through their windows, operatives are able to easily observe the process – the Bonderite L-MR emulsion is virtually transparent, thus ensuring a good view. In some of the cabins, the Bonderite L-MR that sprays and hisses as it lubricates and cools the tools and workpieces is of the previous and long-proven generation with integrated bactericides, while in other enclosures the Bonderite L-MR in service is now the newer, bactericide-free Bonderite L-MR.

“The experience we have had to date is very promising – the system is stable,” says Thomas Andersson who, as an application specialist at Henkel Norden, is responsible for the customer. “Bactericide-free Bonderite L-MR 71-2 can help us to produce in a more environmentally compatible fashion,” adds Lars Wahlberg, production engineer at the customer’s production plant.

The emulsion is regularly monitored by two Henkel employees who are permanently stationed in the factory. They have their own laboratory, take samples and analyze the chemical and biological composition of the fluid. And the bacteria content is a metric that merits particular focus in this regard.

Even in modern factories, strong odors can form after lengthy machine downtimes. Previously, there were two ways to avoid this: first, one could use conventional, bactericide-free cutting fluids in which bacterial growth is initially tolerated and then combated through the introduction of bactericides after a certain concentration has been reached. The disadvantage of this approach is that the killed microbes create an excellent nutrient medium and food store for the next generation of bacteria, so that the process has to be repeated in ever shorter intervals.

The second approach consists of the use of bactericide-containing lubricants with the aim of extensively suppressing bacterial growth. However, this can also lead to the same problem as that encountered with conventional, bactericide-free machining fluids, albeit with something of a delay.

Using an innovative combination of ingredients, Henkel has succeeded in reformulating the associated emulsifier technology. With standard emulsifier concentrations, this innovative development has an extraordinary long lifetime also in very hard water conditions. The formulation is bactericide free and thus does not require repeated addition of toxic bactericides. The result is, that with the exceptionally extended lifetimes of Bonderite L-MR cutting fluids, the environmental impact and costs are being reduced.

Bactericide-free Bonderite L-MR 71-2 offers customers a number of benefits: control of the cutting fluid is easier as no bactericide has to be added, with only the emulsifier concentration needing to be maintained. This saves time and therefore money. Bonderite L-MR 71-2 also actually remains stable for longer and does not need to be replaced or expensively disposed of. Here again, cost advantages accrue. Bonderite L-MR 71-2 has been in use in the Swedish customer’s plant for more than a year now, and has neither needed to be replaced nor “treated” with bactericide. “It can stay in the circuit for three years,” says Thomas Andersson with assuring conviction. “Even after long downtimes, such as during company holidays, the Bonderite L-MR system continues to function well without the need for circulation pumping, extra oxygen input or similarly expensive tricks of the trade. Bonderite L-MR, the long life cutting fluid,” enthuses Lars Wahlberg, listing with some relish the benefits that the product brings.

Advantages in occupational health and safety

The use of Bonderite L-MR 71-2 is also beneficial to occupational health. Contact with bactericides, such as formaldehyde releasing agents, represent a health hazard for employees. Skin irritations and also increased sensitization can result. Moreover, the more frequent emulsion changes that result are not only very costly but also burdensome on the environment.

Until now, the Swedish customer has been using Bonderite L-MR 71-2 primarily in machines used to cut and grind cast iron components. Dozens of such machining units are interconnected via a central supply and filtering system. Around 40,000 liters of the emulsion is pumped through the system into the machines and then back again to the conditioning equipment, where the fluid is cleaned of swarf, chips, oil and other contaminants. Trials are also being carried out with Bonderite L-MR 71-2 on individual machines that are not connected to a central system and on which different metals are machined, including aluminum.

If problems do arise, Henkel employees can be quickly called upon to sort the situation out, again to the delight of Lars Wahlberg. “We sit together and take a thorough look at the problem. It usually turns out not to be the machine or the product alone that is responsible but rather a synchronization or coordination problem.”

If the results produced with Bonderite L-MR 71-2 continue to be positive, this Bonderite L-MR is set for service not only in other metal machining units in the plant but also in other factories of the manufacturer. The big yellow machines from Sweden will then be a little greener, thanks to the ensuing improved environmental compatibility of the manufacturing process that creates them. 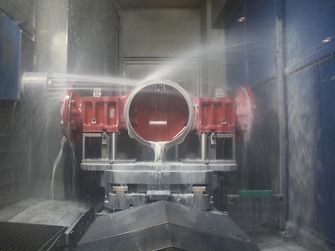 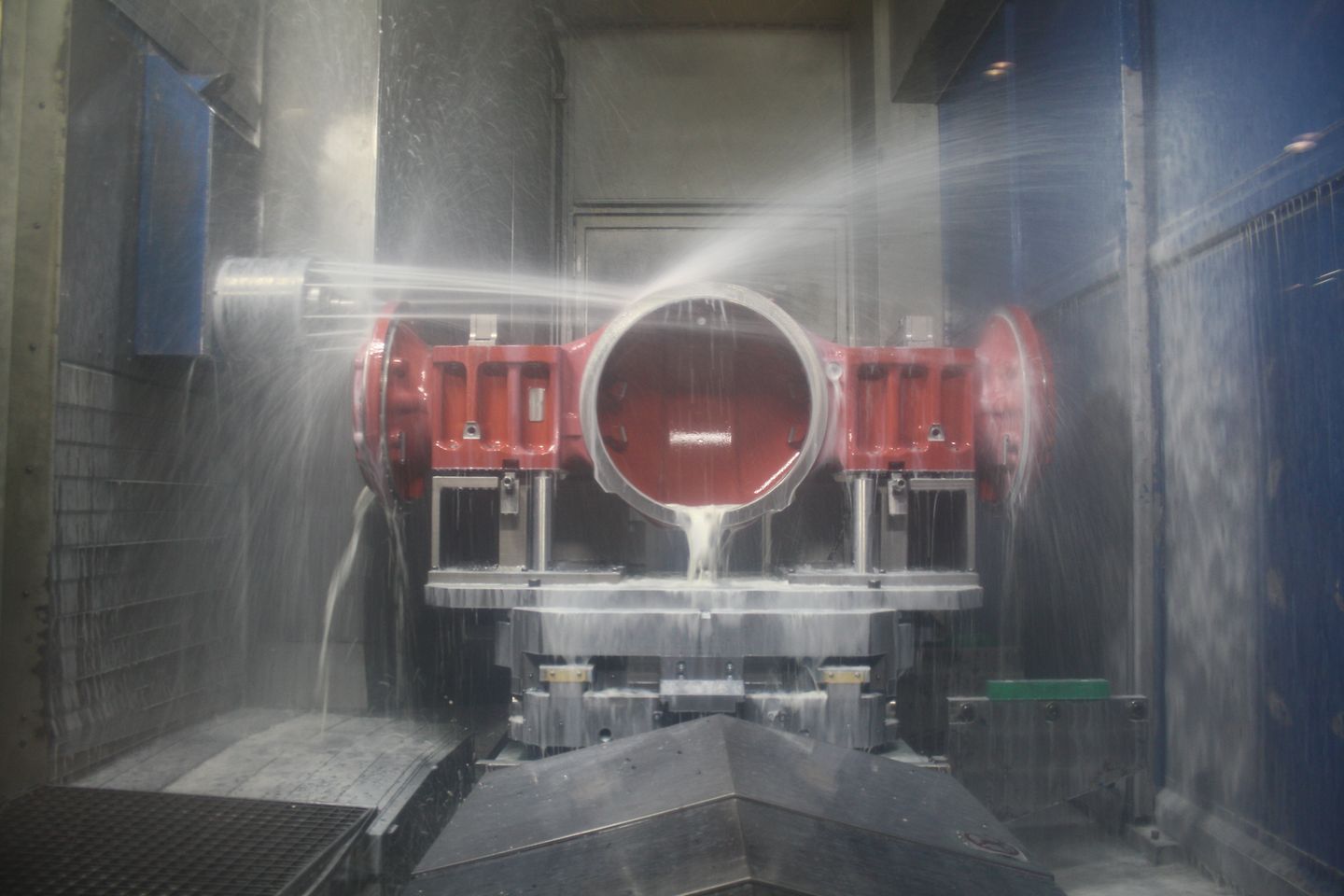 A view of the interior of an axle.

A view of the interior of an axle. 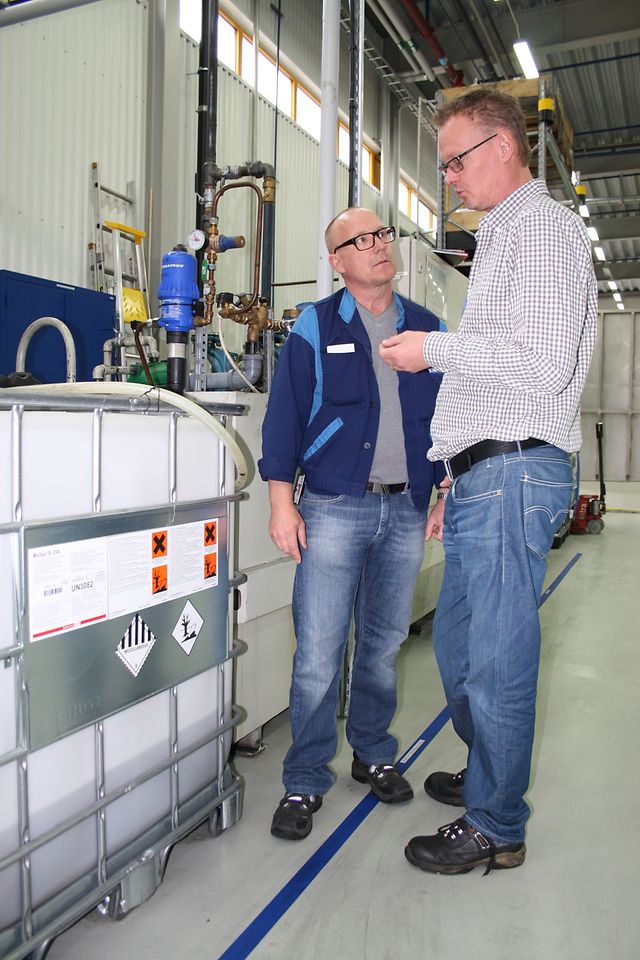 Completely machined and assembled axles prior to installation in their vehicles

Completely machined and assembled axles prior to installation in their vehicles