Henkel is appearing at LIGNA 2013 from May 6 to May 10 in Hannover, where it is presenting its range of new adhesives for the furniture industry. Aside from high heat resistance and low application weights, these innovative products also create a visual appearance that can very much enhance the quality of the end result.

With Henkel’s UV-curing hotmelt, Technomelt CHS 395 UV for edge sealing applications, furniture makers are able to raise the 2D laminating process – in which the wide and narrow surfaces are covered with one finishing film in a single operation – to a new level of efficiency. This innovative UV hotmelt adhesive offers significantly faster setting, which also means faster post-processing in the machine. With this advantage, the edge sealing process can be significantly simplified, leading to a reduction in process cost. Technomelt CHS 395 UV is also significantly more thermostable (up to 100 degrees Celsius) than previously used EVA-based adhesives, producing a hard surface and thus a better barrier against moisture penetration.

The product can also be used in existing production lines. However, the operations for edge sealing and surface lamination can also be delinked and thus applied separately. The edge quality achieved with Technomelt CHS 395 UV also allows furniture manufacturers more flexibility in the selection of their wood-based panels, without adversely affecting the final finish. This also eliminates the “mid layer” issue.

Henkel is also showcasing a range of high-performance adhesives for surface lamination in collaboration with its project partners. With the first reacTec systems from HOMAG now available in the marketplace and, indeed, already in productive service, customers have increasingly expressed the wish that the technology be extended to cater for laminates other than just decorative finishing film – an application for which the Henkel adhesive Technomelt CHS 700 was originally conceived. As this adhesive has virtually no open time, i.e. the time window during which adhesive bonding remains possible, a new process had to be developed in harness with project partners HOMAG and NORDSON. The result is a kind of hot sealing process with which this special adhesive is applied, producing an excellent and highly resilient surface.

However, the requirements that have to be met when bonding PP film are more extensive. Due to the dimensional changes that PP film undergoes under the influence of temperature, the newly developed adhesive needed to exhibit more flexibility. And the results produced by Henkel’s development chemists are impressive indeed: Technomelt CHS 710 is a hotmelt that can be processed on reacTec facilities without problem. The process speed is also the same, but with the application temperature now reduced by up to 30 degrees Celsius. The hardness of the adhesive film is somewhat reduced, while achievable heat resistance remains as high as ever.

In order to optimally adjust the adhesion properties to the laminate material, Henkel liaises closely with leading PP film manufacturers so that, together, they can offer customers effectively coordinated products.

Under the brandname Technomelt PUR, Henkel offers a wide range of reactive polyurethane hotmelts that cure in the presence of humidity. And these PUR hotmelt adhesives are enjoying increasing usage and demand among industrial users, with this upward trend is particularly noticeable in edgebanding applications.

The Technomelt PUR range of adhesives can be relied upon to produce results of particularly high quality. The strength of bond they create is far superior to that achieved with traditional EVA adhesives, for instance. And the thermal stability and moisture resistance they exhibit significantly exceed the levels available with other processes. Even the coveted zero bondline can be achieved with Technomelt PUR hotmelts.

The products are also available as non-hazardous, label-free MicroEmission variants, offering enhanced occupational safety with reduced indoor air pollution. To enable all applicators to use Technomelt PUR hotmelt adhesives, these products are also available in granulate form for edgebanding applications. They can thus be used without further ado on granulate processing machines already in service at the manufacturer’s facility. Moreover, these adhesives can be supplied in white to further enhance the appearance of the final finish. Plus, when it comes to cleaning the applicator machines, Henkel can offer cleaning agents specifically adapted to the Technomelt PUR adhesive used.

Thanks to their outstanding property profiles, the thermoplastic hotmelts from Henkel offer advantages for the end user as well as for the manufacturer and applicator. Technomelt KS 925, for example, produces a particularly clean bondline as well as offering high thermal stability and resistance to moisture.

Because of its low application weight, this adhesive is also particularly economical in use. And Henkel’s application engineers are ready to assist in any way they can in order to enable manufacturers to apply the right adhesive weights for each job. Reduced application weights also mean a significantly improved bondline appearance in the finished product.

Henkel is appearing at LIGNA at Stand D13 in Hall 17, and at a special exhibition dealing solely with Technomelt Hot Sealing for reacTec systems at Stand A07 in Hall 26. Interested visitors are invited to take this opportunity to get to know Henkel’s latest product innovations and to exchange views and expertise with the company’s specialists who will be attending both stands. 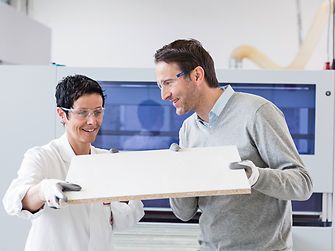 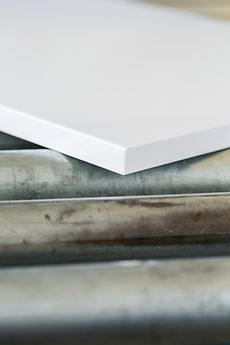 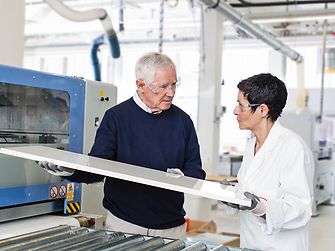 Whether for the main surface or the edge, a Technomelt PUR bond reliably meets the highest requirements.

Whether for the main surface or the edge, a Technomelt PUR bond reliably meets the highest requirements. 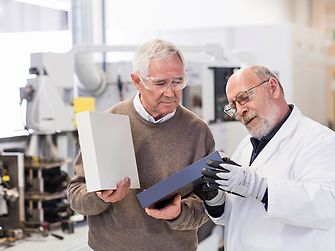 Technomelt KS 925: Edge quality to satisfy even the most discerning customer.

Technomelt KS 925: Edge quality to satisfy even the most discerning customer. 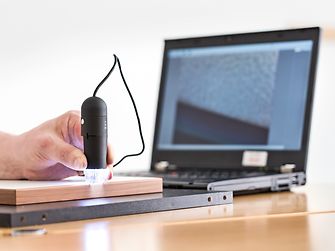